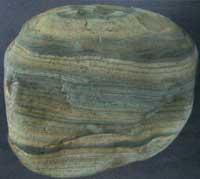 In Jitterbug (2007), the musicians are interpreting photographs of rocks taken for this project by Gwen Deely, as graphic scores; these are intricate in their patterns and color shifts and I found them in a creek bed, up in the Montana Rockies. A pre-recorded surround-sound score draws on insect sounds: aquatic insects which I recorded in the small lakes and backwaters of the Flathead Valley, Montana; and others generously made available to me by Lang Elliott, of the NatureSound Studio. A curious aspect of the underwater recordings, was that these strong sound signals were being created by beetles and other microscopic insects which were always invisible to me, although the water was clear and often shallow. Deep tones from bowed gongs and a piano infiltrate this insect world, providing a strong contrast. William Winant, Gustavo Aguilar and Joseph Kubera. Jitterbug was commissioned by the Merce Cunningham Dance Company in 2006 for the dance eyeSpace.

NOTE: In order to play this score please contact Annea Lockwood for complete set of images and the sound files.

IMPROVISATION GUIDELINES:
Both players work from the same rock image and on the same layer/section.

STRUCTURE: Treat the distinguishable layers of the rocks as individual sections. Each layer is played one at a time, by both players if there are 2 distinct graphic elements in it, or as a solo when one graphic element (e.g. all light colored, all uniformly dark) predominates. Horizontal = time within a section, vertical = the succession of sections.

TIME: Read the layers from bottom to top and right to left, with each layer/group of layers comprising a structural section. The players decide a) which side = the bottom, and b) on the distribution of the layers, i.e.separation of the image into sections.

DURATION: of each layer is predetermined and all layers/sections have the same length in any one performance. For example, if it’s a 20 min version, and players decide to use only one rock read as four layers, they can divide the 20 mins by the number of layers, giving each layer/section 5 minutes. But within a section a player can enter at any time point, need not start synchronously with the other player, or at the beginning, treating the section as a window – Cage-style.

PITCH: Open but responsive to surround sounds whenever possible.

TEXTURE/EVENT DENSITY: Suggested both by the texture of a rock layer and the density of the surround sounds.

INSTRUMENTATION: Players’ choice and can change from performance to performance.

The person mixing decides when to bring in the next pre-recorded ‘track’ when s/he senses the players are ready. S/he also does the live-sound spatialization. The pre-recorded tracks are already spatialized in six channels and incorporate: hydrophone recordings of aquatic insects found in the Flathead River, Montana, and tam tam and piano resonances recorded for this work by William Winant, Gustavo Aguilar and Joseph Kubera. These tracks are played in order, 1 through 6: in a shortened version, the person mixing must start with track 1 and end with 6 but chooses the intervening tracks, still keeping the order, e.g. 1 3 4 6 etc.

These artists have brought the sounds of the Schuylkill into the Academy of Natural Sciences
Stephen Salisbury, The Philadephia Inquirer
June 2, 2022
Read here

More on the press page!